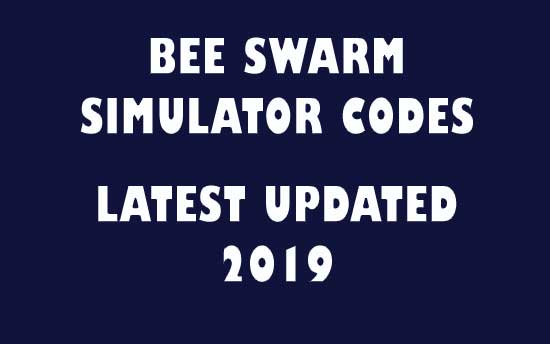 Discover all the Bee Swarm Simulator Codes for 2019 that are active and still working for you to get various rewards like Honey, Tickets, Royal Jelly, Boosts, Gumdrops, Ability Tokens and much more.

Roblox’s Bee Swarm Simulator is a simulation game created by a roblox game developer called “Onett”. In this game, your main objective is to make honey by hatching bees and collecting pollen from flowers.

Honey then can be used to do several fun stuff in the game and explore the bee swarm simulator more by leveling it up.

Honey is the in-game currency which can get you anything in the game.

There are multiple objectives a player has to complete in order to make more honey and explore more in the game. Upgrading bees and pollen collecting tools will help users to speed up their honey production faster. However, quests from bears and mother bee are always there to give you challenges to get more rewards.

Still, it was very hard to make honey faster in the game until May 2018. However, since Bee Swarm Simulator Codes are introduced in the game by Onett on May 18, 2018, Users can now redeem them in order to get free items in the game and move on in their gaming journey with a little boost.

Onett regularly shares these promo codes for bee swarm simulator on various places including in the game itself, on his Roblox Group, His Twitter Handle, and also on the game’s discord server. We have also seen him posting some codes on his roblox profile page.

However, these codes get expired after some time and users are unable to use them after the given time. Still we have hunted all the bee swarm simulator codes available from the given sources and made a combined list of all working codes.

Remember, these codes can only be used once and in the given period of time only. Below is the full list of working roblox bee swarm simulator codes you can redeem directly in your game account and take free items including honey.

To redeem Bee Swarm Simulator Codes, do this:

Go to the System Option (Circular Gear Icon) available on the Top Left Corner of the game. Once clicked, a new sidebar will open where you can see “redeem code option”.

Just put your code in the code bar and press redeem button. If your code is valid, then it will get processed. And you will earn the rewards associated with it on immediate effect.

Remember, these codes are not case sensitive. That means you don’t need to write them as you are seeing in above table. For example, you can put “SOUP” code in following ways too:

You may also like to know about our latest view on how to get free robux using legit methods only.

Also, if you found any roblox bee swarm simulator code that we have missed, let us know about it.  We will surely add it in our list that can help all our roblox community.